THE COUNTRY’S jobless rate in March fell to its lowest level since the start of the coronavirus pandemic, the Philippine Statistics Authority (PSA) reported on Thursday.

Preliminary results of the PSA’s March 2021 round of the Labor Force Survey (LFS) showed around 3.441 million unemployed Filipinos, down from 4.187 million and 3.953 million in the February and January LFS rounds, respectively. 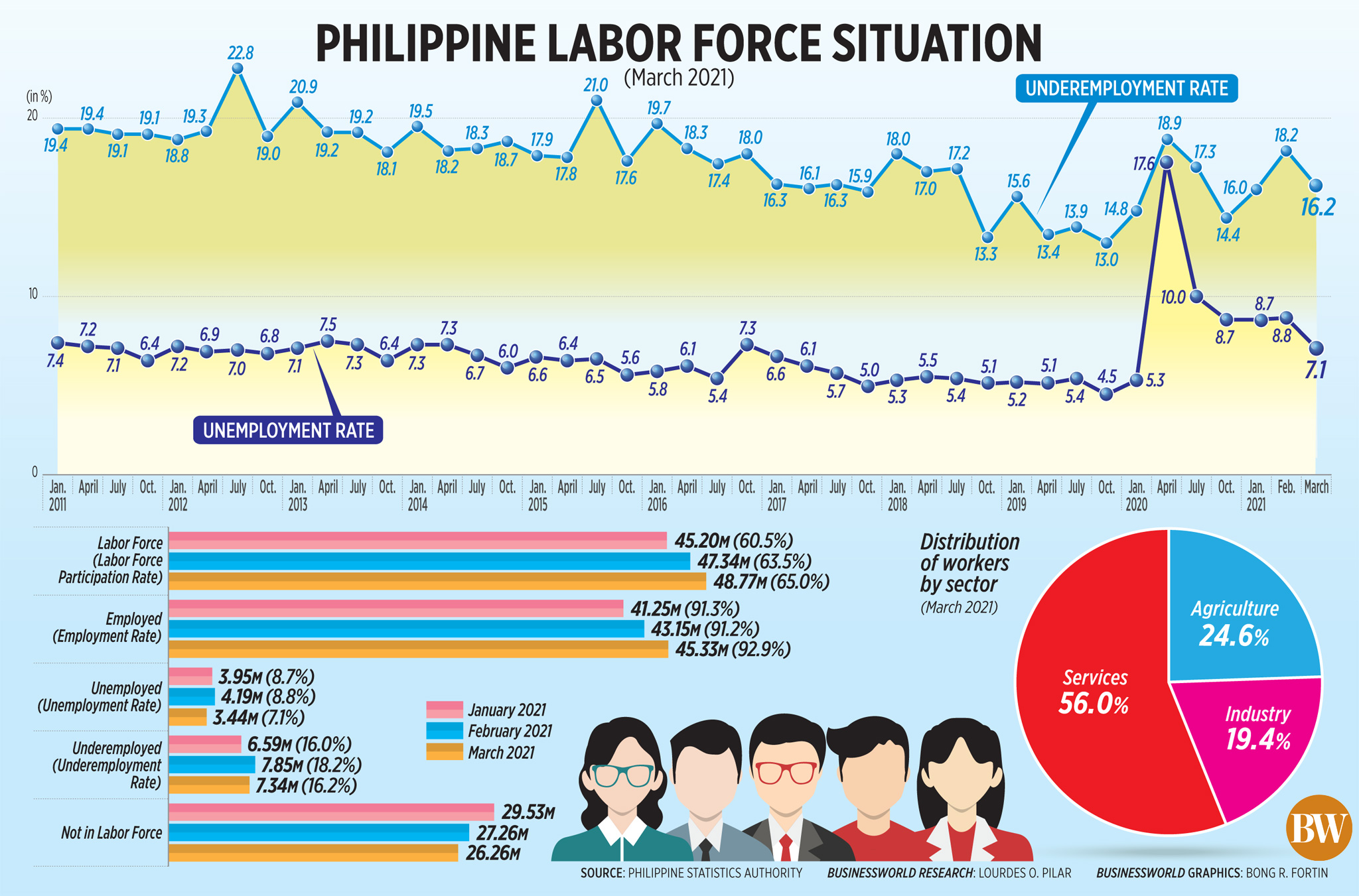 This translates to 7.355 million underemployed Filipinos, less than the 7.850 million in February. However, this was higher than the 6.589 million recorded in the January LFS round.

Among subsectors, construction posted the largest increase in employment on a month-on-month basis with 845,543, followed by wholesale and retail trade with 672,144 and agriculture and forestry with 623,481.

Comparing March performance with February, there were 1.155 million jobs restored in the industry sector during that period, followed by 826,698 jobs in agriculture, and 196,740 in services.

Working hours averaged 39.7 a week, higher the average of 38.9 in February.

LOCKDOWN EFFECT
“With the recovery of the economy after the ECQ was relaxed in mid-2020, 11.5 million jobs have been generated as of March 2021, more than offsetting the 8.7 million jobs that were lost in the period March to May 2020. This translates to a net job creation of 2.8 million jobs,” Socioeconomic Planning Secretary Karl Kendrick T. Chua, Finance Secretary Carlos G. Dominguez III, and Budget and Management Secretary Wendel E. Avisado said in a joint statement.

The PSA noted the LFS was conducted between March 8 to 27, days before the government put Metro Manila, Bulacan, Rizal, Laguna, and Cavite on the enhanced community quarantine (ECQ) — the strictest form of lockdown — in reaction to a renewed surge in coronavirus cases.

The government has imposed lockdown restrictions since March last year to curb the spread of COVID-19 (coronavirus disease 2019). From March 29 to April 11 this year, Metro Manila and the provinces of Bulacan, Cavite, Laguna, and Rizal were placed under ECQ. The areas are currently under a less restrictive modified enhanced community quarantine (MECQ) until May 14.

The economic managers expect to see a “temporary reversal” of employment gains in the LFS round for April given the imposition of ECQ and MECQ in Metro Manila and nearby provinces. They, however, said the impact is expected to be “less severe” compared with that of April 2020 given the government’s “more risk-managed approach to present quarantines.”

“Unlike last year’s ECQ and MECQ where around three-fourths of the economy was shut down, most sectors of the economy, including public transport, this time around are allowed to operate subject to guidelines from the Inter-Agency Task Force on the Management of Emerging Infectious Diseases,” they said.

“Our economy is gradually getting back on track as more people are actively participating in the labor force and are becoming employed,” he said.

In a Viber message, Security Bank Corp. Chief Economist Robert Dan J. Roces said the gradual reopening of the economy played “some part” in the March LFS results. However, he noted the results show an “uneven recovery and deep scarring effects” with other sectors continuing to decline despite the reopening.

“Job creation is not reducible to a question of ‘opening up the market,’ or going back to the ‘old normal.’ The world has changed and we have to adjust to it,” he said.

Asked for his outlook on the jobs situation, Mr. Ofreneo said “only a miracle” can ease unemployment further in April given the implementation of stricter lockdowns. He also cited April as the month where most senior high students and college graduates join the labor force, thus increasing the demand to find jobs. — Ana Olivia A. Tirona with inputs from Gillian M. Cortez and Beatrice M. Laforga

Adiantku 9 months ago
By Applying Six Sigma, A Happy Company Is A Good Company 7 min read